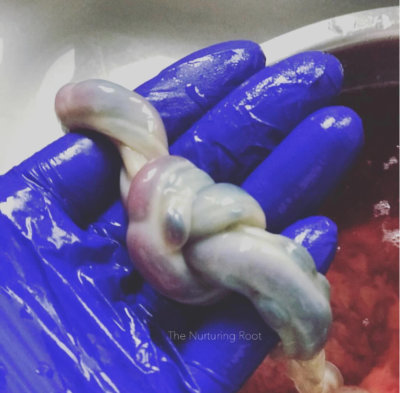 One might think there’s little mystery to the umbilical cord, but it turns out there’s a lot to learn
about the lifeline connecting mother and baby. Here are 5 interesting facts about that special
life-giving link.

Umbilical Cord Forms Shortly after Fertilization
Soon after an egg is fertilized, it splits in two, half that becomes the embryo and the other half
that becomes the placenta. The umbilical cord is formed from the embryonic tissue and like the
embryo itself, begins quite small and grows as gestation carries on.

More than a Simple Cord
The umbilical cord, while always referred to as a singular product of pregnancy, is actually three
separate connections from mom to baby, housed inside one protective sleeve. There are two
arteries responsible for carrying blood to the placenta and a larger vein that carries blood back
to the fetus. This vein and two arteries are surrounded by a gelatinous substance called
Wharton’s Jelly that provides further protection and prevents the cord from kinking.

The Long and Short of It
The average length of the umbilical cord is about 20-24 inches long with wide variance among
babies. Some babies actually have no cord at all, referred to as achorida, while others may
have a cord up to 118 inches long. Any cord greater than about 40 inches is considered a long
cord. A cord with a length less than around 12 inches is considered short.

Knots and Nuchal Cords
With even the average umbilical cord being long enough for baby’s movement to twist the cord,
there are often fears associated with knots in the cord and the possibility of a cord being
wrapped around baby’s neck, called a nuchal cord. However, with the cord’s protective factors
(i.e. Wharton’s jelly and helical structure) in place, these issues are generally not dangerous at
all. If fact, about a third of all babies are born with a cord wrapped around the neck. And nuchal cords have not been shown to have adverse perinatal outcomes. This is reassuring for many pregnant women, especially with so much misinformation surrounding this particular issue.

Importance of Delayed Clamping
In the past, clamping of the umbilical cord after birth was often performed seconds after
delivery. Newer research shows that delaying the clamping of the cord, up to several minutes or
even after the cord has stopped pulsating, is likely a much better method as it provides baby
with more blood transfer from the placenta and has longterm implications for baby’s iron stores.
The umbilical cord is a fascinating piece in the even-more-fascinating process of gestation. It is
the physical connection between mom and baby and the catalyst for baby’s intrauterine growth
and development. The severing of the umbilical cord is often a special moment for new parents.
This seems appropriate since it allows a moment of reflection on this lifeline that has been with
baby from shortly after fertilization up through delivery.